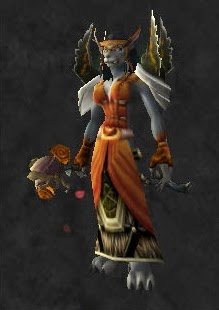 Murkblood Cover:  Green BOE
Ravenwing Pauldrons:  Dropped by Lieutenant Drake in Old Hillsbrad Foothills
Flamestrider Robes:  Dropped by Pyromancer Loregrain in Blackrock Depths
Manimal's Cinch:  Quest reward in Shadowmoon Valley
Devilsaur Gauntlets:  Crafted by leatherworkers
Righteous Bracers:  Green BOE.  Or any small bracer that doesn't show under the Devilsaur Gauntlets.
Jinxed Hoodoo Kilt:  Drops in Zul'Farrak.  It has the same model as the bottom part of the Flamestrider Robes,  so it doesn't show.
Staff of Earned Tranquility:  Low level Worgen only quest reward.  There are plenty of other staves that would work with this for a non-Worgen. 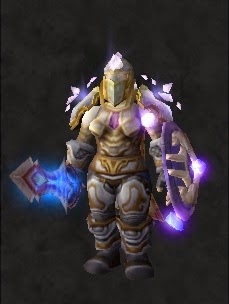 Brighthelm of Justice:  Drops from Hydross the Unstable in Serpentshrine Caverns.
Pauldrons of the Argent Sentinel:  Drops from Morogrim Tidewalker in Serpentshrine Caverns.
Justicar Chestguard:  Paladin only.  The token for this drops from Magtheridon.  There are several other similar chest pieces that could be used by any plate wearer.
Gauntlets of the Righteous:  Dropped by Warchief Kargath Bladefist in Shattered Halls.
Girdle of Valorous Deeds:  Dropped by Aeonus in Heroic Black Morass.
Legplates of the Righteous:  Dropped by Aeonus in the Black Morass.
Boots of the Righteous Path:  Dropped by Warchief Kargath Bladefist in Heroic Shattered Halls.
Icy Cloak:  Crafted by Tailors.  There are a number of other cloaks with the same appearance.
Bloodmaw Magus Blade:  Dropped in Gruul's Lair.
Aldori Legacy Defender:  Dropped in Gruul's Lair.