These are really striking leather robes from Magister's Terrace.  I've put together several different combinations of pieces to go with these robes. 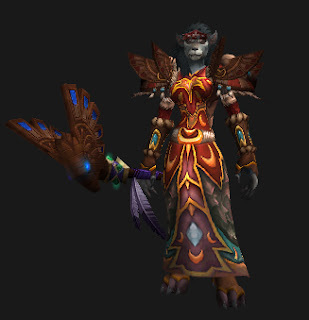 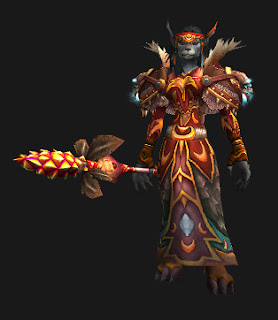 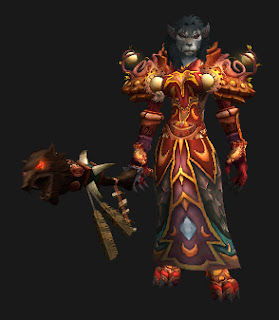 Cover of the Keepers This model doesn't work in the model viewer, so I've included a screenshot of it instead.
Shoulderguards of Assimilation
Bindings of the Depths
Handguards of Potent Cures
Boots of the Petrified Forest
Staff of the Plaguehound Drops in Naxx 10

Another staff that could work with any of these sets is the Staff of the Plaguebeast, which also drops in Naxx 10.

Here is the actual completed set on my Worgen.  It's a little different than what I have above. 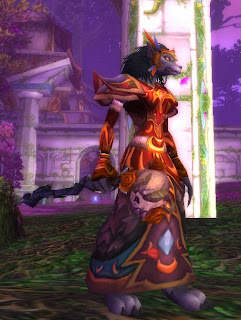 Moonkin Headdress Quest reward from the Blood Furnace.  Same model and color as Murkblood Cover
The Dreamer's Shoulderpads Blue BOE.  Same color and model as the green BOE Wolf Rider's Shoulder Pads.
Robes of Summer Flame
Righteous Bracers These don't actually show, and that's the point.  Many other bracers would show above the Devilsaur Gauntlets.  Any small bracer that only covers the wrists and not the forearms would work here.  You won't need to transmog your bracers if you use the other gloves shown above.
Devilsaur Gauntlets Blue crafted BOE.  Same model and color as Murkblood Gloves and a couple of other gloves.
Manimal's Cinch Quest reward in Shadowmoon Valley.  Recolor of Stormrage Belt.
Staff of Earned Tranquility Low level Worgen-only quest reward.  This staff has an animation, with petals that slowly drop from the roses.  There is another Alliance-only quest reward with the same model, Chillwind Staff, but it has pink roses.

Ever wish your clothie looked like a druid?  Now you can with this transmog set built around Embrace of the Wind Serpent, an epic drop from the Sunken Temple.  The inspiration for this set actually was the bracers, the Goldenvine Wraps, that I got as a quest reward when I was farming the Slave Pens for something else. 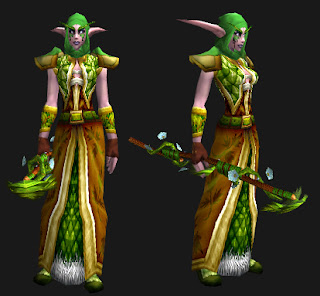 Conjurer's Hood Green BOE.  There are several other BOE's you could substitute here--check the Wowhead link.
Embrace of the Wind Serpent Drops in the Sunken Temple off the Shade of Hakkar.  Very low drop rate--expect to spend a lot of time farming that robe.
Ivycloth Mantle Green BOE
Feralfen Sash Green BOE
Goldenvine Wraps Quest reward from the Slave Pens.  Don't worry if you completed this quest when Burning Crusade was new and no longer have the bracers.  The quest has been reset and the quest giver is now at the dungeon entrance.
Heavy Linen Gloves Crafted by tailors.
Vinerot Sandals Drops in Maraudon
Draenic Wildstaff Drops in Auchenai Crypts.  This staff has a eye-catcing blooming flower animation.  There is a druid-specific quest reward with the same model. 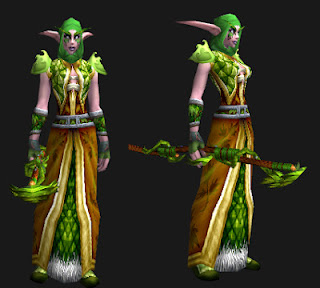 Combines pieces from the Primal Mooncloth set and a low-level Alliance quest reward. 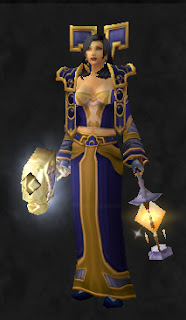 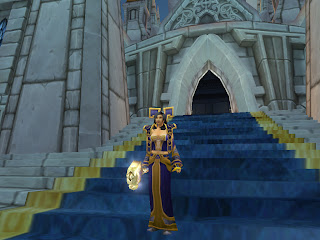 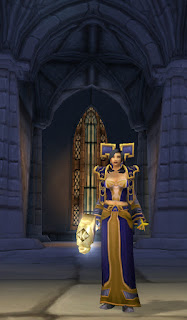 Got tired of farming heroic Slave Pens for the Swamplight Lantern, got even more tired of farming Arcatraz for a slightly different color of the same model, and I didn't feel like spending my Justice Points on Hermit's Lamp.  I lucked out and found Dreamseeker Dandelion for sale at the Auction House, so I went with that for my offhand. 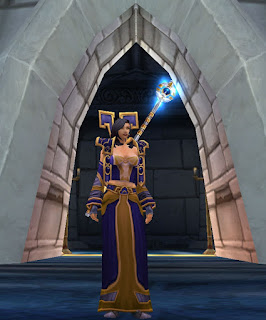 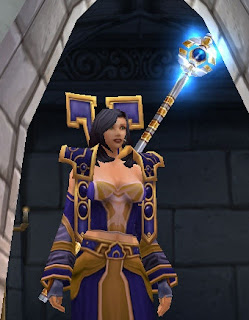 Alternate weapon:  Redemption.  Drops in what we used to call Live Strat.

Based around Robes of the Exalted from Stratholme and Lightning Infused Mantle. 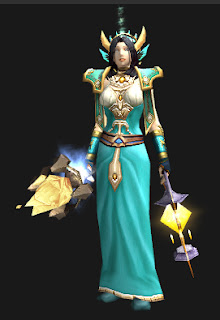 Aurora of Transcendence Dropped in Blackwing Lair
Lightning Infused Mantle Quest reward from Halls of Lightning.  Don't despair if you did this quest and  when WOTLK first came out and then vendored these shoulders.  The WOTLK dungeon quests have been reset and the quest giver is now inside the entrance of the dungeon.
Robes of the Exalted Drops from Lord Aurius Rivendare in Stratholme
Runed Spell-Cuffs Bought for Justice Points in Shattrath
Frostweave Gloves Crafted by tailors
Nethershard Girdle Dropped by Moroes in Karazhan
Slippers of Serenity Dropped by Exarch Maladaar in Auchenai Crypts
War Mace of Unrequited Love Dropped by Keristrasza in heroic The Nexus
Swamplight Lantern Dropped by Quagmirran in heroic Slave Pens 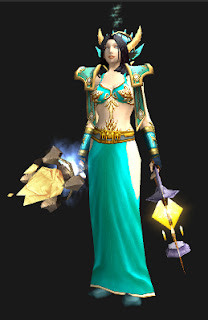 Alternate version #1.  You'll have to find some pants that don't show too much. 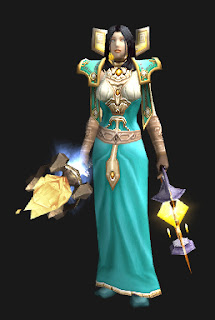 Alternate version #2, using Replica Virtuous Crown as well as the replicas of the bracers, gloves, and belt from the Vestments of the Virtuous set.

Versions by other people here.
Posted by KG at 10:17 AM No comments: 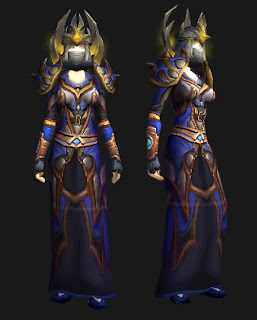 A muted seafoam green set made up of drops from Vanilla WOW instances mixed with pieces from the green BOE Duskwoven set. 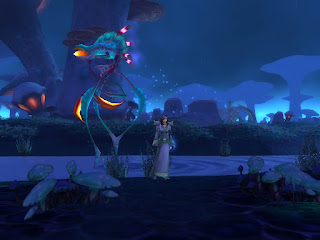 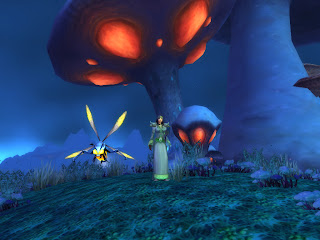 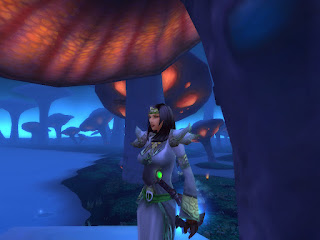